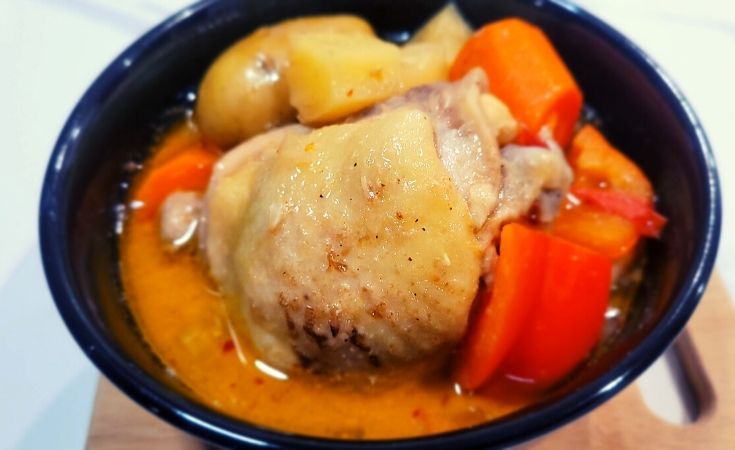 Pininyahang Manok Sa Gata is the Tagalog translation of pineapple chicken or chicken pineapple in coconut milk. It is under the chicken stew category and is incredibly simple to make. It is also well suited for the taste buds of children. This delicious Filipino recipe has a lot of different versions. These include a version where instead of using coconut milk, its is preferred by some to use evaporated milk, fresh milk, heavy cream or all purpose cream (for those who want to have a creamy chicken stew). Some use different chicken parts such as chicken breast, thighs and even chicken liver. There are also some who prefer to use whole black peppercorns over ground pepper. This pininyahang manok recipe is really a flexible dish that often depends on the cooking style or personal preference of whoever is in the kitchen. However, my favorite version of this chicken pineapples Filipino recipe is the classic version which is with coconut milk. 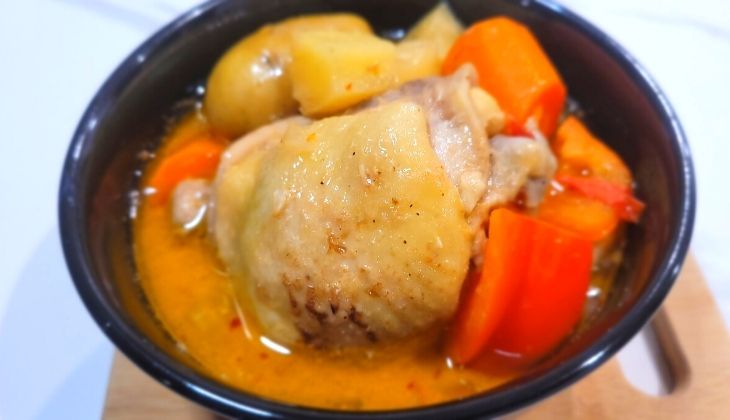 Coconut milk gives a nutty and sweet flavor to any dish and is really an ideal ingredient for soup because of its creamy texture. Aside from that, coconut milk has significantly less cholesterol and less trans fat content than other milk. It is also a good substitute for dairy milk for people who are lactose intolerant because coconut milk is lactose free. It also has an ingredient that works so well with fish sauce which makes them a perfect match working together to add an amazing umami flavor to any dish. So if you are like me and are a fan of coconut milk, use fish sauce as one of the seasonings you will see exactly what I mean.

This pineapple chicken recipe is not only easy to cook but it’s also a delicious and hearty meal. It contains a good amount of protein from the chicken meat and nutrients from the pineapple and the remaining ingredients.

Pineapple is known to have a low calorie content but is loaded with powerful nutrients such vitamin A, K, zinc, calcium and phosphorous. It is significantly rich in vitamin C and manganese. It is said that a cup of pineapple tidbits or chunks provides 131% of the daily recommendation of vitamin C and 76% of the recommended daily intake of manganese. Vitamin C as we all know plays a significant role in our body to maintain a healthy immune system and helps the body to absorb iron from the diet. Manganese on the other hand is a naturally occurring mineral that promotes growth, regulates metabolism, and has antioxidant characteristics.

Bell Pepper is low in calories and is a great source of vitamin C and other antioxidants. Bell peppers also come in different colors such as yellow. green, orange and my favorite, red bell pepper. Just like pineapple, bell peppers are also loaded with different forms of vitamins and minerals but they are mostly known to have a very high content of vitamin C. Eating a whole bell pepper will give you up to 169% of the of the Recommended Daily Intake (RDI) for vitamin C which makes bell pepper one of the richest dietary sources of these essential nutrients.

Carrots provide a significant amount of beta-carotene which is essential to keep your eyes healthy. Beta-carotene provides your eyes with protection from the sun and decreases the chances of cataracts and other eye related problems.

Potatoes are fat and cholesterol free except when you deep fry them. They are actually a good source of fiber which can help your heart and may prevent certain diseases by helping to maintain cholesterol and blood sugar levels. They are also full of antioxidants that help in preventing certain diseases and vitamins to keep your body to functioning properly.

Tomatoes provide good amounts of different forms of vitamins and minerals such as vitamin C, potassium, folate and vitamin K. It is low in carbs and high in fiber.

How To Make This Traditional Filipino Dish

I hope you will give this recipe a try. It is a tangy but savory Filipino chicken dish that will surely be enjoyed by the family at the dinner table and become a family favorite Filipino food recipe. 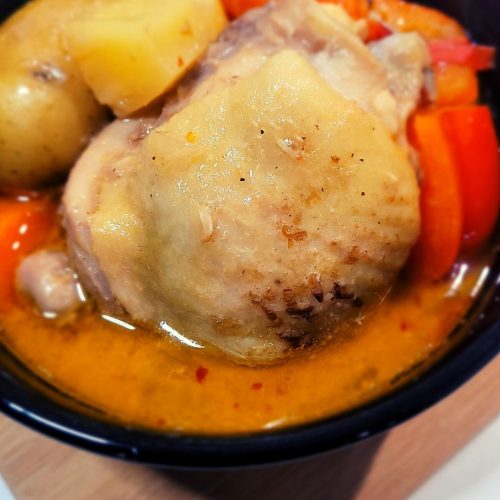