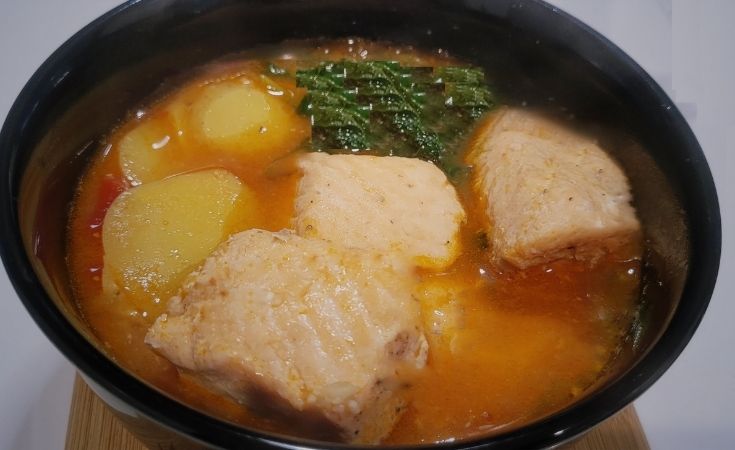 The “Sinigang” term means that a seafood or a meat is cook by boiling them with the use of souring agents like tamarind. Most of the “sinigang” recipes consist of meat or seafood along with water spinach, fresh tomatoes, okra and white radish.

Sinigang is one of the Filipino’s food staples because it easy to prepare and easy to cook especially if the one preparing the dish is using the ready made “sinigang mix powder”. They only need one pot for this recipe and 10 minutes of food preparation. After that, they will only spend 25 to 30 minutes to cook the entire dish, then they will have a healthy and delicious meal. Filipinos like to cook this recipe during rainy season or during cold weather. Since Filipinos like to serve this dish piping hot with freshly steamed rice, this helps them to keep warm and cozy.  This is where I got the idea of cooking salmon in sour broth using lime and lemon juice since tamarind powder or the “sinigang mix powder” is not available in the local grocery stores. Aside from that, I added grated fresh ginger because it goes well with tomatoes and also added potatoes to make this recipe a complete meal as well. That’s how my Recipe For Salmon Soup With Vegetables: Fish Soup in Sour Broth was created.

See also my other fish recipes inspired by other Filipino fish recipes such as Canned Mackerel Recipe In Thai Red Curry With Tomatoes and Mustard Greens, Baked Chickpeas and Mackerel Patties and Sauteed Sardines with Chickpeas an Easy Breakfast Meal.

How To Cook My Recipe For Salmon Soup With Vegetables: Fish Soup in Sour Broth

I hope you give my Recipe For Salmon Soup With Vegetables: Fish Soup in Sour Broth a try. A recipe that is healthy, easy to prepare, easy to cook and delicious! Let me know what you think.. Enjoy Cooking! 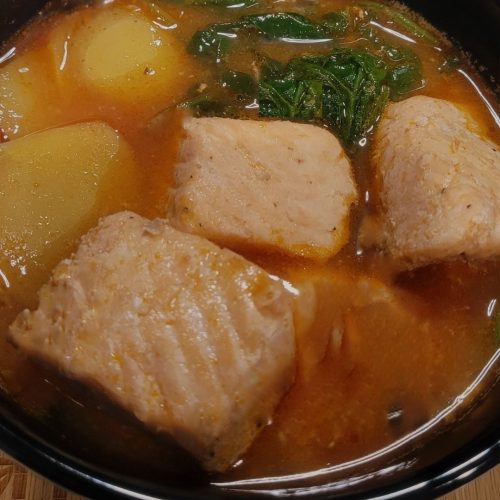